FROM MOON OF ALABAMA, BY “B” (FOUNDING EDITOR)

The New York Times—like much of the US media—are specialists at lying by omission—of context.

When the U.S. instigates its so called ‘color revolutions’, the transatlantic main stream media are usually supportive. But the support is rarely as extreme as the extraordinary one the New York Times gives to the rioters in Hong Kong.

For the timeline we check with Wikipedia on the 2019 Hong Kong anti-extradition bill protests:

Demonstrations against the bill first occurred in March and April, but greatly expanded in scale and intensity beginning in June. At least 240,000 people (up to one million according to organisers) marched in protest of the bill on 9 June.
…
Chief Executive Carrie Lam suspended the extradition bill on 15 June and further declared it to be “dead” on 9 July.

Shortly before the first large demonstrations against a proposed amendment to an exiting extradition bill, the New York Times gave space to one (in)famous ‘political activist’ from Hong Kong. On June 4 one Ray Wong Toi-yeung wrote on the Timesopinion pages:

When the tanks rolled into Tiananmen Square in Beijing on June 4, 1989, many Hong Kongers watched in horror on their TVs. A few days before, one million of them had marched in solidarity with the rebellious Chinese gathered in the square to ask for more liberalism and democracy from the Chinese authorities. Thirty years on, it is Hong Kong that is fighting for democratic values — for its very political survival, actually — against another onslaught by the same Communist government in Beijing.

Wong, who now lives in Germany, was a leader of the 2014 Umbrella movement, also known as the (NED Financed) Hong Kong Riots. He was since with several other anti-mainland organizations in Hong Kong. In 2016 he was seen in secret meetings with U.S. consulate staff.

On June 30 an op-ed by one Fred Chan Ho-fai (later updated) attempted to justify the rioters violence:

An important idea that has been circulating in online forums is now firmly planted in my mind. It is called the Marginal Violence Theory (暴力邊緣論), and it holds that protesters should not actively use or advocate violence, but instead use the most aggressive nonviolent actions possible to push the police and the government to their limits.This is what some protesters have been doing today, July 1, on the anniversary of the handover of Hong Kong to China from Britain in 1997. After a ceremony marking the anniversary, a group of protesters have stormed the Legislative Council’s building. Though they have damaged property, they are not seeking to harm anyone.

Such actions are a way to make noise and gain attention. And if they prompt the police to respond with unnecessary force, as happened on June 12, then the public will feel disapproval and disgust for the authorities. The protesters should thoughtfully escalate nonviolence, maybe even resort to mild force, to push the government to the edge. That was the goal of many people who surrounded and barricaded police headquarters for hours on June 21.

Provoking violent police reactions is the declared aim of the rioters.

After an extraordinary run of 16 opinion pieces on the issue in just 38 days, the NYT opinion pages went suddenly quiet on Hong Kong. Who told the editors to stop?

Anyway, it does not mean the New York Times stopped supporting the anti-government riots. Witness today’s news piece that is not only slanted against Hong Kong’s government and police, but is also clearly lying:

Hundreds of protesters surrounded a police station in Hong Kong on Tuesday, some scuffling with officers, after the authorities said they had charged dozens of people with rioting over clashes with the police days earlier.The rioting charges were a distinct escalation in the government’s response to protests that have shaken Hong Kong for weeks.

There were “clashes with the police” during unapproved demonstration. Taking part in these is not a sin in my book – been there, done that. But if one does take part in riots one should be ready to accept the consequences. Some violent people were caught. The government will punish them. Those are the universal rules of the game. So why is it seen as a “distinct escalation” when the Hong Kong government charges some rioters?

The charges will most likely add to the public anger. The government said Tuesday evening that 44 people who were arrested Sunday night had been accused of rioting. In addition, a 33-year-old man would also be charged with assaulting a police officer, and a 24-year-old man was charged with possession of offensive weapons.
…
As news of the charges spread, hundreds of people dressed in black, the color of the protest movement, gathered around Kwai Chung Police Station, where the suspects were being held. The police told the crowds to disperse and used pepper spray against some demonstrators.

The writer seems to believe in the ‘marginal violence theory’. He thinks that the charges will increase the rioters support. He will be disappointed. Most people in Hong Kong despise attacks on policemen and rioting that disturbs their businesses and daily life.

BTW – those who still doubt that the incidents in Hong Kong are an attempt of a U.S. instigated ‘color revolution’ should reread the last paragraph: “people dressed in black, the color of the protest movement”.

Now comes a paragraph in which the NYT writer is outright lying:

Around 11 p.m., a small number of officers came out of the station to confront protesters, including one police officer holding a shotgun that he pointed at some of those gathered, but he did not fire. The gun did not have the distinct orange color of those the police have been using to fire rubber bullets, raising fears they were deploying more lethal weapons.

The Times uses this photo to illustrate the scene: 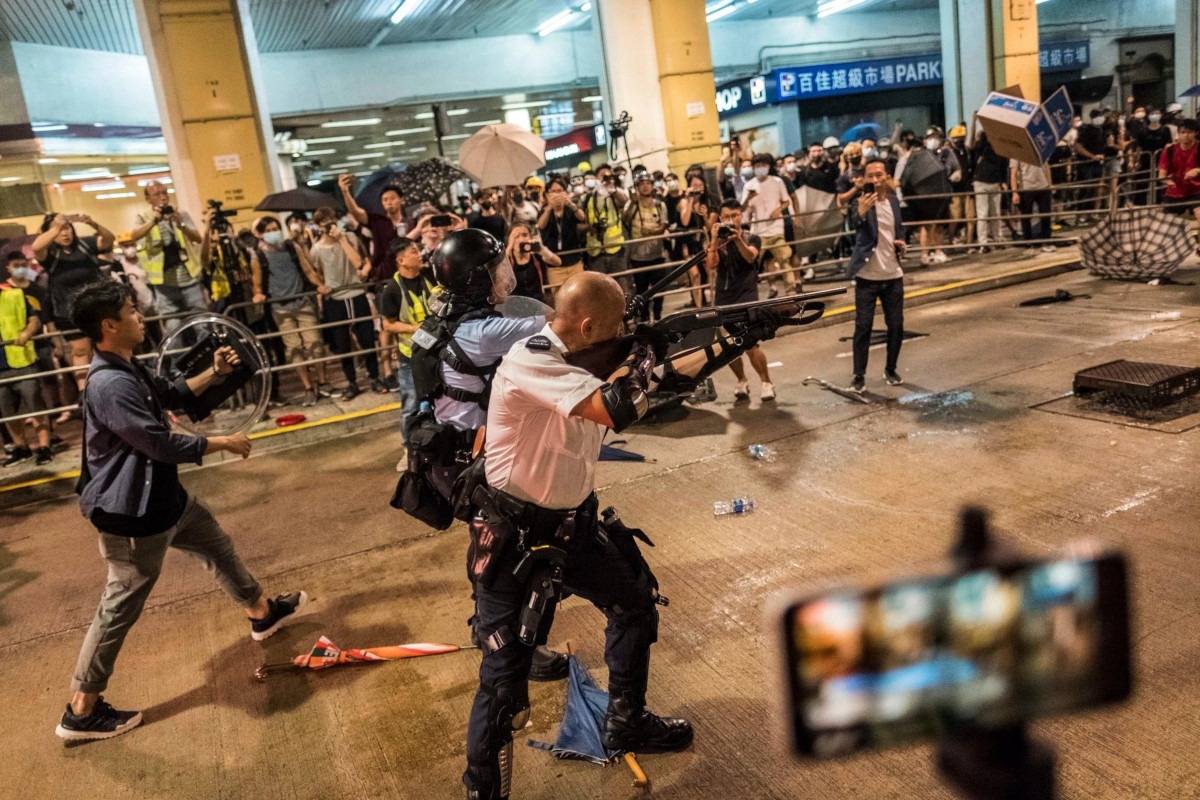 That looks like an aggressive cop.However, the picture and the text in the Times are highly misleading. Below are two videos posted by Stella Lee of HK News. They show that the mob violently attacked two lone policemen, threw stuff at them, and even pulled one of them to the ground and trampled on him. Only when one of the policemen lifts his beanbag shotgun, do the attackers retreat.

Stella Lee @StellaLeeHKnews – 18:34 UTC · Jul 30, 2019An video circulated online shows a police officer pointing his gun at the protesters after he was beaten by them near Kwai Chung police station. #antiELAB

Stella Lee later posted another video that shows a small group of policemen, under constant attack, retreat from the scene.

So who is the aggressor here?

A policeman pointed a shotgun at a protesting crowd on Tuesday night in fear for his life, after he was surrounded and had his helmet snatched, the force has said.The sergeant aimed the weapon, loaded with beanbag rounds, during clashes in which 23 other officers were assaulted and splashed with corrosive liquid, it added.
…
It said that at 9.30pm, when two police vehicles left the station, protesters threw corrosive liquid at officers nearby.

An hour later, some officers were sent to Kwai Fong MTR station, where there was a report of an assault. As they returned to the station, the statement read, “two officers were surrounded by a big group of radical protesters, who hurled objects and launched attacks”.

“One of them was assaulted by many people. In order to protect his life and personal safety, he raised a long gun loaded with beanbag rounds as a caution,” it continued. “The officer also had his helmet snatched.”
…
The force said 24 officers were assaulted or had corrosives thrown at them in the ensuing fracas, with five sent to hospital.

The videos support the police description of the incident. The NYT report is clearly wrong.

The policemen who escaped lynching was immediately doxed. His family will need protection:

Suspected personal details of the officer, and a supposed photo of his family, appeared on social media hours after images of him pointing the gun were widely circulated.

That the protesters are not peaceful daisies is obvious. This can also be seen in thesephotosof previous fights with the police.

The SCMP also live blogged the riots on Sunday:

Hong Kong police and protesters clashed again on Sunday night in what has become a regular scene in Hong Kong.Police made at least a dozen arrests while tear gas was fired at various locations on Hong Kong Island. Protesters marched unauthorised for the second night running, after an illegal demonstration ended in bloody clashes at Yuen Long MTR station on Saturday

The violence continued until the protesters dispersed at midnight …

Some of the pictures in the live blog show the projectiles the protesters used against the police:

11:31PM – More protesters join last stand on Jubilee StreetAbout 100 protesters have come from the Wan Chai direction to take up positions at a road block on Jubilee Street again. The area is where police have pushed back demonstrators from the liaison office. On a nearby footbridge, bricks and bamboo sticks cut from building scaffolding are seen. 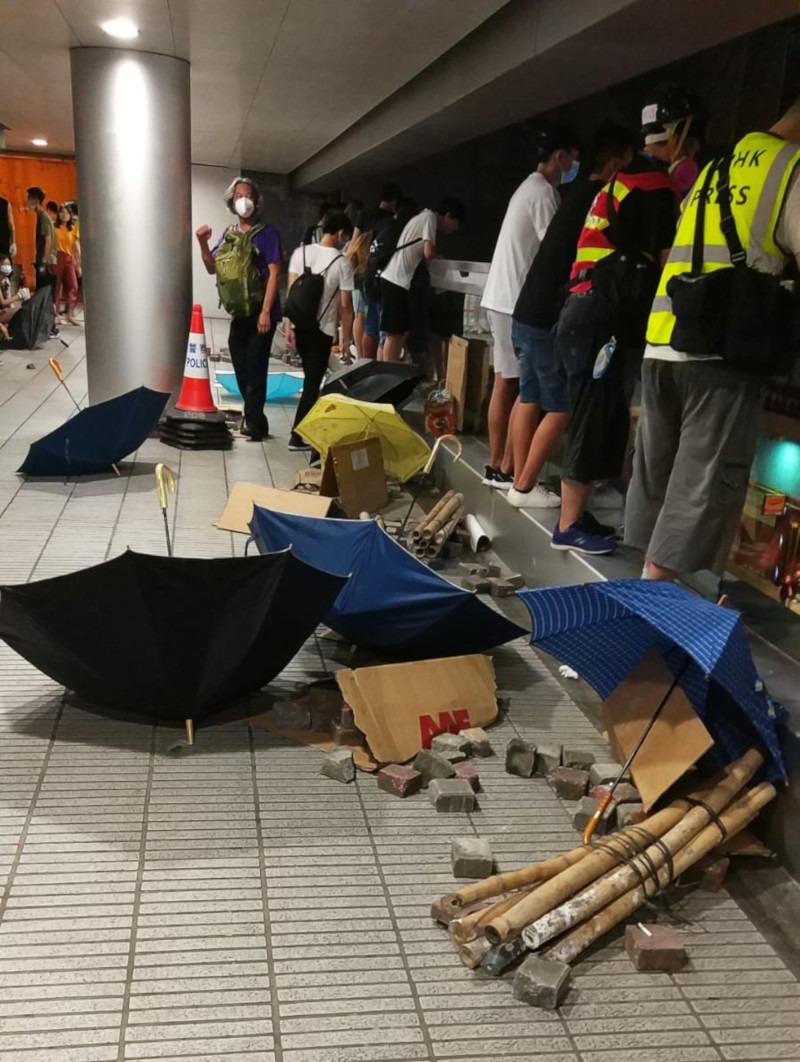 The bricks and bamboo sticks laid ready to be hailed down on policemen. The use of such violence against them, as promoted on June 30 on the op-ed pages of the Times, seems to have some effect. At its end today’s NYT piece notes that it encourages them to do their job:

The police were noticeably more aggressive about grabbing protesters and had detained at least 49 by Monday morning. They included 32 men and 17 women, aged 16 to 41. Two were temporarily released, while another two were granted bail pending further investigation, the authorities said. Those charged were expected to appear in court Wednesday morning.

The government of Hong Kong played the issue well. It removed, for now, the amendment that was used as pretext to launch the ‘regime change’ demonstrations. The participation in them immediately began to shrink. The government then turned the ‘marginal violence theory’ against the protesters. It let the core demonstrators, who are mostly students from movements the U.S. secretly supports, escalate the violence. While the police held back from extreme measures, the rioters increased their level of force. Even those Hong Kong media that supported the demonstrations, had to take note of that. Now the fruits are ripe. The government can pick up the leaders of the riots and put them into jail. Everyone but the NYT acknowledges that it is the legal and right thing to do. It will not cause a wider public to protest against it.

The U.S. and the NYT lost their second attempt to turn Hong Kong against mainland China. Three to five years from now they will try again. It will again be in vain.

“b” (“Bernhard”) is MoA’s founding editor and chief analyst.