DISPATCHES FROM MOON OF ALABAMA, BY “B”

Yesterday the U.S. left the Intermediate-Range Nuclear Forces (INF) treaty. The end of this and other treaties that eliminated or restricted the deployment of nuclear systems is seen by some as the beginning of a news arms race:

William J. Perry – @SecDef19 – 7:37 PM · Aug 2, 2019The U.S. withdrawal from the INF Treaty today deals a great blow to nuclear arms control and global security, we are sleepwalking into a new arms race.

The former Secretary of Defense is wrong. The race will not happen because Russia (and China) won’t run. Or said differently, they already won.

To understand why that is the case we have to look at the history of the nuclear treaties and their demise.

The German chancellor Helmut Schmidt urged the U.S. to station nuclear armed intermediate range missiles in western Europe to press the Soviets to eliminate the SS-20. In 1979 NATO made the double track decision. It would deploy U.S. made Pershing II missiles in Europe and at the same time offer the Soviet Union a treaty to ban all such intermediate range weapons. The effort was successful.

The 1987 Intermediate-Range Nuclear Forces Treaty (INF) between the U.S. and the Soviet Union (later Russia) banned all of the two countries’ land-based ballistic missiles, cruise missiles, and missile launchers with ranges of 500 to 5,500 kilometers (310-3,420 mi). All SS-20 and Pershing II missiles were withdrawn and destroyed. A nuclear war in Europe became less likely.

Another successful treaty was the 1972 Anti-Ballistic Missile Treaty. It prohibited both sides from deploying more than one ABM system. It was necessary because the side that thought it had a working anti-ballistic missile defense could launch a massive first strike on the other side, destroy most of its forces, and defend itself against the smaller retaliation strike that would follow. Both sides were better off with prohibiting ABM in general and to rely on Mutually Assured Destruction (MAD) for the prevention of a nuclear war.

In June 2002 U.S. President George W. Bush, under the influence of one John Bolton, withdrew from the ABM treaty which led to its termination. The U.S. deployed ABM system in Alaska and California but during tests the systems proved to be unreliable.

The U.S. claimed at that time that ABM was needed to defend against nuclear missiles from North Korea and Iran. That was always obvious nonsense. At that time North Korea had no missile that could reach the United States and Iran has no nukes and limits the range of its missiles to 2,000 kilometer.

Russia saw the U.S. step as an attempt to achieve a first strike capability against it. It immediately started the development of new system that would make the U.S. anti-missile defense irrelevant.

The U.S. also pressed NATO to deploy ABM systems in Europe. Iran was again cited as the main danger. Plans were developed to deploy Patriot and THAAD anti-missile system in Poland and Romania. These did not immediately endangered Russia. But in 2009 President Obama canceled the deployment and came up with a more devilish plan. The AEGIS system used on many U.S. war ships would be converted into a land based version and deployed in an alleged ABM role. AEGIS consist of radar, a battle management system and canister missiles launchers. The big issue is that these canisters can contain very different types of missiles. While the Standard Missile-2 or 3 can be launched from those canisters in an ABM role, the very same canisters can also hold nuclear armed cruise missile with a range of 2,400 kilometers.

Russia had no means to detect which type of missiles the U.S. would deploy on these sites. It had to assume that nuclear intermediate range nuclear missiles will be in those canisters. In 2016 the U.S. activated the first of these AEGIS ashore systems in Romania. It was that step that broke the INF treaty.

That Obama had earlier signed a nuclear agreement with Iran that made sure that Iran would never build nukes made it obvious that Russia is the one and only target of those systems:

During a visit to Greece intended to repair ties with the EU, Vladimir Putin said that Russia has “no choice” but to target Romania, which has recently opened a NATO missile defense base, and Poland, which plans to do so within two years.“If yesterday people simply did not know what it means to be in the crosshairs in those areas of Romania, then today we will be forced to carry out certain measures to ensure our security. And it will be the same with Poland,” Putin said during a joint press conference with Greek Prime Minister Alexis Tsipras in Athens on Friday.
…
“At the moment the interceptor missiles installed have a range of 500 kilometers, soon this will go up to 1000 kilometers, and worse than that, they can be rearmed with 2400km-range offensive missiles even today, and it can be done by simply switching the software, so that even the Romanians themselves won’t know,” said Putin, who is in Greece for a two-day tour.

Russia urged the U.S. to negotiate about the issue but the U.S. rejected that. A year after the U.S. deployed its system in Romania it alleged that Russia itself was in breach of the INF treaty. It claimed that Russia deployed the 9M729 missile, an extended range version of a previous missile, with a range that exceeds the limits of the INF treaty. Russia says that the missile is just a technical upgrade of an older one and has a maximum range below 500 kilometers. The U.S. never provided evidence for its claim.

In January 2019 the U.S. rejected a Russian offer to inspect the new Russian missileand started to pull out of the INF treaty. It gave a six month notice on February 2 and yesterday the INF treaty terminated.

Neither the New York Times obituary of the treaty nor the CNN write-up mention the ABM system in Romania and Poland that were the first to breach of the treaty. Both repeat the unproven claim that Russia deployed new intermediate range systems as fact.

The Europeans in NATO are not happy about the treaty’s end:

The official demise of a landmark arms control pact between the US and Russia is a “bad day” for stability in Europe, the military alliance’s Secretary General Jens Stoltenberg told CNN Friday, hours after the US withdrew from the pact.Speaking to CNN’s Hala Gorani, the Norwegian politician called the end of the Intermediate-Range Nuclear Forces (INF) treaty with Moscow a “serious setback.”

“I’m part of a political generation that was shaped during the 1980s, where we all were concerned for the risk of nuclear war and where we were actually able to reach the INF treaty that didn’t only reduce the missiles but banned all intermediate range missiles and weapons,” he said.

Stoltenberg went on to blame Russia without mentioning the fake U.S. “ABM” sites in Romania and Poland. 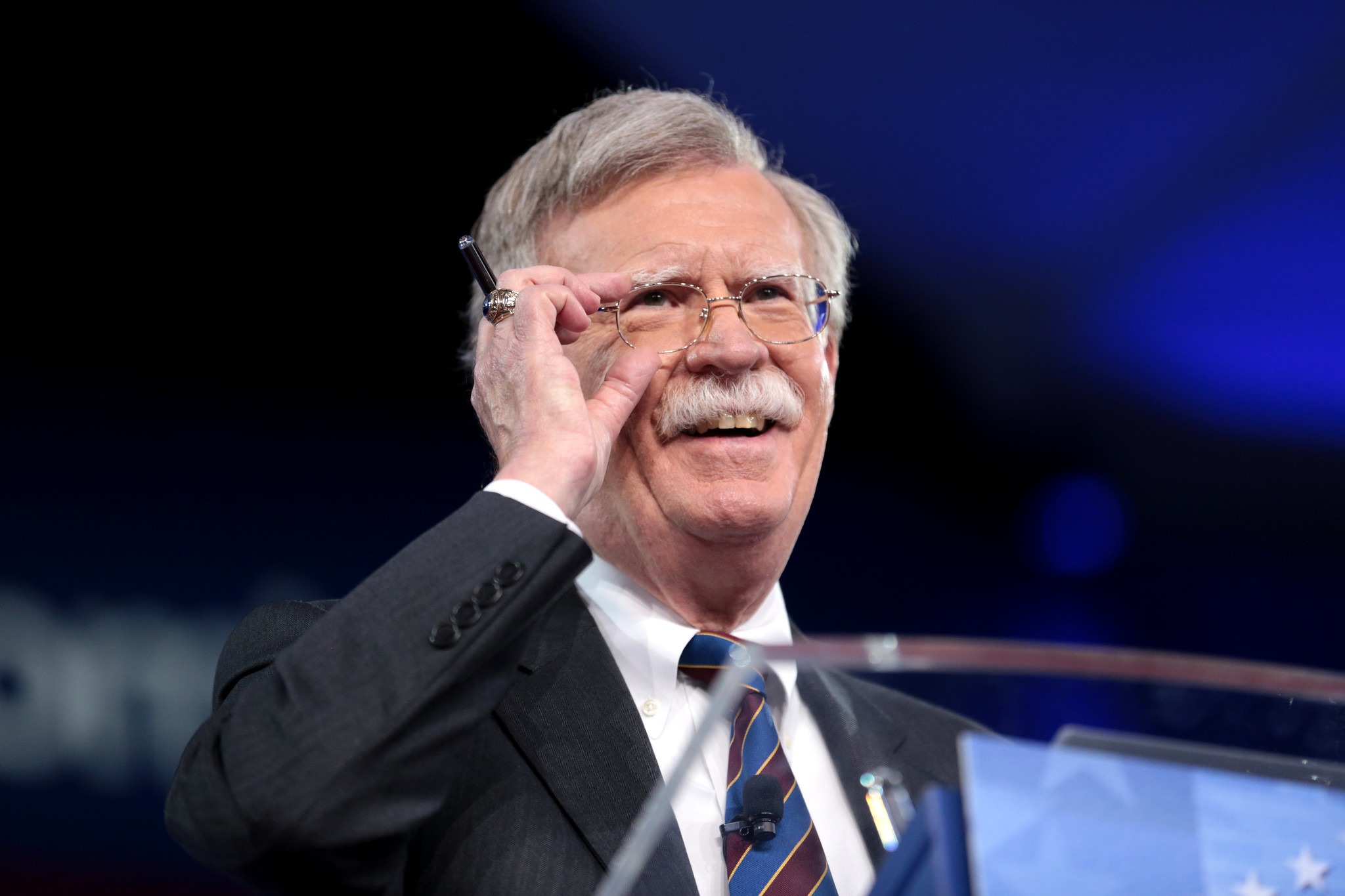 John Bolton: A walking malignancy, 100% grade pure scum, thriving in a regime run by and for the criminal billionaires destroying the planet whose power base remains America.

It was John Bolton who was behind the demise of the ABM treaty and it was John Bolton who convinced Trump to terminate the INF treaty. With Bolton in the lead the New Start treaty, which limits intercontinental systems but ends in 2021, will likely not be renewed. Soon the whole system of treaties that limited U.S. and Russian nuclear weapons and delivery means will be gone.

Why is the U.S. so eager to end all these? It is known John Bolton hates anything that restricts the U.S., but there is also a larger strategy behind it. The U.S. believes that it defeated the Soviet Union by creating an arms race that the Soviets lost. It hopes that it can do the same with a recalcitrant Russia. But that calculation is wrong. President Putin has long said that Russia will not fall for it:

Moscow will not engage in an exhausting arms race, and the country’s military spending will gradually decrease as Russia does not seek a role as the “world gendarme,” President Vladimir Putin said.Moscow is not seeking to get involved in a “pointless” new arms race, and will stick to “smart decisions” to strengthen its defensive capabilities, Putin said on Friday during an annual extended meeting of the Defense Ministry board.

Putin & Co have learned: Russia has no World-Historical purpose and its military is just for Russia. They understand what this means for Russia’s Armed Forces:Moscow doesn’t have to match the US military; it just has to checkmate it.

And it doesn’t have to checkmate it everywhere, only at home. The US Air Force can rampage anywhere but not in Russia’s airspace; the US Navy can go anywhere but not in Russia’s waters. It’s a much simpler job and it costs much less than what Stalin, Khrushchev and Brezhnev were attempting; it’s much easier to achieve; it’s easier to plan and carry out. The exceptionalist/interventionist has to plan for Everything; the nationalist for One Thing.

Russia already has all the weapons it needs to defend itself. U.S. warfare depends on satellite communication, air superiority and missiles. But Russia’s air defense and electronic warfare systems are first class. They demonstrated in Syria that their capabilities exceed any U.S. systems.

When the U.S. left the ABM treaty Russia started to develop new weapons. In 2018 it was ready and demonstrated weapon systems that defeat any ABM system. The U.S. can not longer achieve first strike capability against Russia no matter how many ABM systems and nukes it deploys. There is no defense against hypersonic systems, nuclear torpedoes or nuclear powered cruise missiles with unlimited reach.

If the U.S. wants to start a new arms race with Russia or China it will be the only one to run. It will have to run fast to catch up.

Unlike the U.S. neither Russia nor China try to achieve world wide hegemony. They only have the need to defend their realm. The U.S. threat against both of them made them allies. If China needs more defense capabilities Russia will be happy to provide these. A U.S. nuclear attack against either of them, from Europe, Japan or the U.S. itself, will be responded to with a nuclear attack on the U.S. mainland. As the U.S. has no ability to defend itself from the new Russian systems it will continue to be deterred.