One sign of the falling rate of intelligence in American public discourse is the wildly inaccurate use of political labels. Listening to the political noise, one might think the country is being overrun by a horde of “neo-fascists”, “fascists”, and bonafide “Nazis”.  In a world riddled with imagined threats to U.S. imperial power, new Hitlers (or aspiring Hitlers) abound, from Putin in Russia, Maduro in Venezuela, and whoever is ruling Iran.  President Trump himself has been characterized as the most recent reincarnation of Hitler.   That none of these images is even remotely connected to political reality hardly interrupts the continuing nonsense.

Fascistic tendencies are indeed visible at the summits of American power: unrestrained corporate interests, militarism, the surveillance state, imperialism, authoritarianism.  But that, on the whole, is not what politicians and media pundits have in mind when they attack people they hate – mostly ordinary right wingers – with overheated epithets drawn mindlessly from the past.  Nowadays the terms “fascism” and “Nazism” are lazily invoked simply as personal smears. 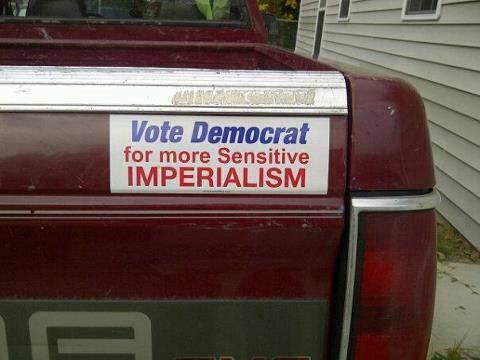 When it comes to socialism, matters are no better: references are typically detached from any recognizable historical meaning. Listening to FOX News and vocal Republicans, we learn that the Democratic party is being taken over by a wave of Marxists and socialists getting ready to overthrow capitalism.  Thanks to Bernie Sanders, whose membership in the Democratic Socialists of America (DSA) is taken as a measure of oppositional zeal, we are told the Democrats have suddenly fallen under the spell of insurrectionary politics.  Recent Ben Shapiro broadcasts have been advertised as a “Warning Against the Socialist Threat”, triggered by the stunning primary victory of Alexandria Ocasio-Cortez for New York’s 14thCongressional seat.   Facing Democrat Beto O’Rourke to keep his Senate seat, Ted Cruz says he fears that Texas will be overrun by “freedom-hating socialists” in the event O’Rourke wins.   Many progressive Democrats, for their part, have embellished a “socialist” identity, including Ocasio-Cortez, Sanders, and Cynthia Nixon in her failed campaign against New York governor Andrew Cuomo.

Could the outsized fears of Shapiro and others – or, conversely, the hopes of DSA-style Democrats – make sense?  The prominence of Sanders and the breakthrough of Ocasio-Cortez have in fact boosted DSA fortunes and revitalized hopes for a left-leaning Democratic party that could, finally, break the conservative hold of the Clintonites. At present no fewer than 42 DSA-backed candidates are running for office in 20 states.   National membership has increased from about 6000 to more than 45,000, with additional surges expected.  Karl Marx has enjoyed something of a revival.  DSA folks often refer to each other as “comrades”.  Even the mainstream press, including the New York Times, has been duly impressed by the “socialist” upsurge – no doubt seen as yet another counter to the evil Trump. 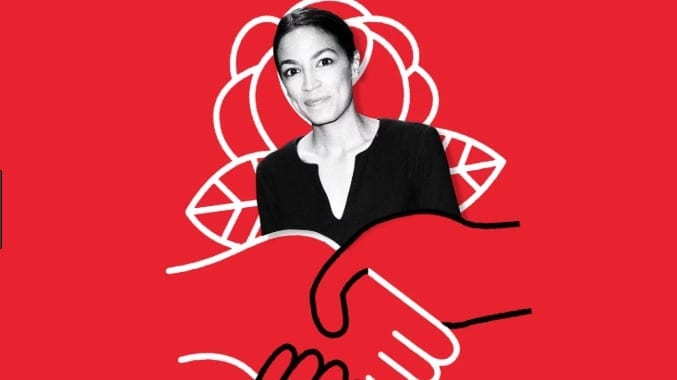 Ocasio-Cortez received an astounding 58 percent of the vote against the fourth most powerful Democrat in Congress – a triumph celebrated by CNN, Time magazine, The Guardian, and other gatekeepers of political opinion. She ran as the more “inclusive” candidate, dependent on small individual donations and outspent 18 to one ($3.4 million to $194,000).  She embraced a strongly progressive agenda: medicare for all, enhanced minimum wage, liberalized immigration reforms, getting money out of politics, building a green infrastructure, gun control, a “peace economy”.  The campaign set out to reach those feeling disempowered, alienated, and dejected in the wake of Trump’s ascent to the White House, surpassing all expectations.

The leftward shift set in motion among Dems might indeed be worth celebrating.  American society badly needs these reforms, however truncated.  Two questions arise, however: to what extent can such reforms be achieved within the framework of an uncompromisingly capitalist party, and, even if achieved, in what sense would they resemble socialism as traditionally understood?

Judging from the lengthy European experience, some far-reaching reforms could be adopted without significantly altering the deeply-entrenched class and power

relations of advanced capitalism.  The outcome would be social democracy of the sort that has for many decades prevailed within most European (and other industrialized) societies.  A more conservative American power elite has fiercely resisted any shift toward a broader social Keynesianism (expanded domestic spending), opting for greater reliance on military Keynesianism, but perhaps that could change if the Sandernistas and DSA manage to push the Dems further leftward.

Socialism, however, has always meant opposition to capitalism as a system of economic and political power, replacing corporate interests with public ownership leading to a more egalitarian class structure and expanded democratic governance.  Unfortunately, the modern landscape in Europe is bereft of anti-system movements and parties at a time when global capitalism (despite its severe contradictions) has solidified its ideological hold.  Leftist forces, generally fixated on electoral politics, have become appendages of the corporate-state system, reflected in the trajectory not only of postwar social democracy but of Communism, the Greens, and dispersed radical groups that surface and re-surface from time to time in such countries as Italy, France, Spain, and Germany.  Meanwhile, social Keynesianism itself has come under mounting siege in the face of heightened austerity policies.

In the U.S., “socialists” aligned with the DSA envision no future beyond an extensively reformed capitalist order – roughly equivalent to what European social democracy realized at its peak a few decades ago.   For the moment, their goal is to refashion the Democratic party – that is, push it leftward primarily through an electoral strategy.  The DSA program, according to official statements, anticipates a “humane social order based on popular control of resources and production, economic planning, equitable distribution, feminism, racial equality, and non-oppressive relationships”.   Entirely laudable, to be sure, but hardly rising to the concrete features of a distinctly socialist politics.  In other words, something considerably short of a Marxist avalanche.

Thus, even should the Sandernistas emerge as the “new face of the Democratic party”, problems loom.   The first of these goes to the heart of the matter: just how far can the Dems, fully embedded in the power structure, be pushed leftward?  The party is, after all, dominated by Wall Street, the warfare state, transnational corporations, and foreign entanglements that will not be easily pushed aside in favor of a “more humane social order”, especially as electoral politics ultimately dictates moderation and “centrism”.   Nowhere in Europe has the once-championed “parliamentary road to socialism” led to a break with the state-corporate order – and those oppositional movements and parties never had to confront a powerful military apparatus like that of imperial America.

The “democratic socialism” professed by Ocasio-Cortez and the DSA will in any event be subverted by the strategic decision to throw a preponderance of resources into the Democratic party.  Ocasio-Cortez believes the Dems can be transformed into a “party of the people”, but that is sheer delusion given a long history of futility not only for the Dems but for their European counterparts.  There is nothing in DSA literature or experience suggesting the organization is prepared to attack the main centers of American power, much less overturn capitalism.

“Democratic socialism” (often confused with social democracy) turns out to be a fiction where the all-consuming party of capital can so extensively influence the course of events.  This might be considered an ironclad truth gained from past experience.  The Italian Marxist Antonio Gramsci, reflecting on the socialist impasse at the end of World War I, could write: “Illusion is the most tenacious weed in the collective consciousness.  History teaches but it has no pupils.”   The modes of exit from a narrow parliamentarism – factory councils, Leninist party, fascism – are well known to anyone paying close attention to the first half of twentieth-century history.  Exactly one century later, little has changed.

While Ocasio-Cortez speaks optimistically of a “peace economy”, the means of reaching such an alternative – involving abolition of the permanent war economy – remain vague.  More crucially, the general DSA program is notorious for its lack of critical attention to global politics.  This was even true of Sanders’ campaign.  A “new politics” does not systematically address the enormous challenges posed by U.S. militarism and imperialism, without which social reforms cannot go very far.   With the largest military-industrial apparatus in history still intact, what in the end could an American democratic socialism concretely promise?

In fact DSA leaders have been perfectly willing to live with the warfare-state behemoth, even as one of its main purposes is to combat leftist opposition wherever it seems threatening.  Sadly, the recent national outpouring of praise for John McCain was joined by both Sanders and Ocasio-Cortez, who toasted the ultimate warmonger as true American hero.  Ocasio-Cortez added: “John McCain’s legacy represents an unparalleled example of human decency and American service.  I learned a lot about the power of humanity in government through his deep friendship with Senator Kennedy.”

Social democracy, anyone?  Whatever the electoral fate of Ocasio-Cortez and those other 41 DSA-endorsed candidates, Ben Shapiro and those those other anxious FOX pundits can relax:  socialist revolution is not on the horizon, while its historical agency would never be DSA (or the Dems) in any case.  For those DSA activists still genuinely committed to democratic socialism, the ensemble of structural and ideological obstacles posed by the grand party of neoliberal globalization and imperialism is sure to be insurmountable.