FROM MOON OF ALABAMA, BY “B”

Western media currently publish glorifying obituaries for a Syrian ‘rebel’ who is know for extreme sectarianism and for being a member of a Jihadi group that is aligend with al-Qaeda.

The Associated Press, the BBC, the Guardian and analysts all write of Abdul Baset al-Sarout who yesterday died of wounds he received two days earlier when his group attacked Syrian government forces.

Abdul Baset al-Sarout, 27, rose to fame as a goalkeeper for his home city of Homs and won international titles representing his country. When peaceful protests broke out against Mr. al-Assad in 2011, Mr. al-Sarout led rallies and became known as the “singer of the revolution” for his ballads.When Syria slid into civil war, Mr. al-Sarout took up arms. He led a unit of fighters against government forces and survived the government siege of Homs.

A Syrian footballer who became a symbolic figure in the rebellion against the country’s president, Bashar al-Assad, has died of wounds suffered in a battle with government forces.

Hassan Hassan @hxhassan – 4:11 PM – 8 Jun 2019Some individuals celebrated as heroes make you doubt all stories of heroes in history books. Others, like Abdulbasit Sarout, not inspire of but despite his flaws, make those stories highly plausible. He’s a true legend & his story is well documented. May his soul rest in peace

There were rumours that Mr Sarout subsequently pledged allegiance to the so-called Islamic State.He denied this, but admitted he had considered the idea when IS seemed the only force strong enough to combat the government – a sign of how the rebel cause disintegrated.

“He was both a popular figure, guiding the rebellion, and a military commander,” said Maj. Jamil al-Saleh,leader of the rebel group Jaish al-Izza, in which Mr. al-Sarout was a commander. “His martyrdom will give us a push to continue down the path he chose and to which he offered his soul and blood as sacrifice.”

The above may leave readers with a few questions.

Q: What ‘ballads’ did the “singer of the revolution” sing?

A March 2012 video shows al-Sarout taking to the stage at a demonstration in the part of Homs that he and other ‘rebels’ occupied.

Abdul Baset al-Sarout chants slogans each of which the crowd then repeats:

We ar all Jihadis.
Homs has made its decision.
We will exterminate the Alawites.
And the Shiites have to leave.

Q: What made al-Sarout a “symbolic figure”?

Sarout appeared as a main persona in a pro-Jihadi propagada documentary that mainstream media hyped:

Filmed during two years, from 2011 to 2013, this by turns exhilarating and devastating documentary tracks some key players in the resistance against Bashir al-Assad’s regime. The foremost is Abdul Baset al-Sarout, once a goalkeeper for Syria’s national youth football team, he is a charismatic character who starts out leading chants in the streets in 2011 and ends up becoming a battle-worn leader for the militia.

Q: What were the ‘flaws’ the ‘true legend’ al-Sarout allegedly had?

While al-Sarout did not mind suicide bombings and called for mass murder of people of other beliefs his drug fuelled style of life was not pure enough to be accepted by the Islamic State. 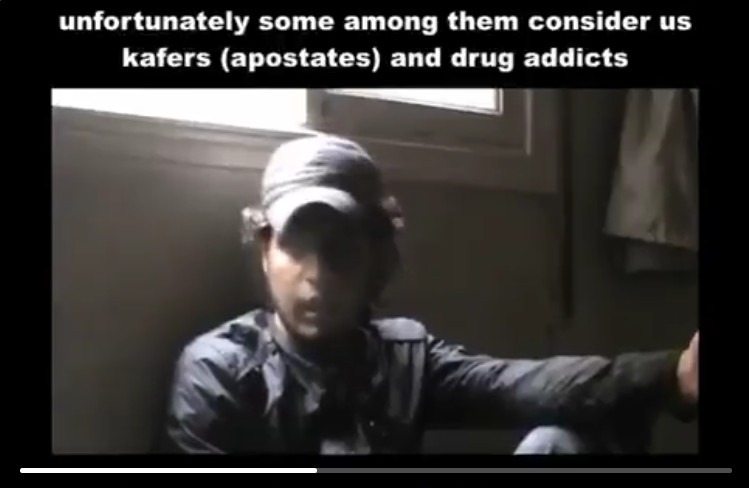 From a 2014 interview (vid) with the ‘charismatic character’ recorded shortly before the Syrian Arab Army removed al-Sarout and his group from Homs:

Our blame for the Islamic State and Jabhat al-Nusra comes with love because we know that these two groups are not politicized and have the same goals as us and are working for god and that they care about Islam and Muslims.

Unfortunately some among them consider us kafers (apostates) and drug addicts. But god willing we will work with them shoulder to shoulder when we leave here. And we are not Christians or Shia to be scared of suicide belts and car bombs. We consider these things as a strengths of ours and god willing they will be just that.

This message is to the Islamic State and our brothers in Jabhat al-Nusra that when we come out (of Homs) we will all be one hand to fight Christians and not have internal fights among ourselves We want to take back the lands that have been filthied by the regime, that were entered and taken over by Shias and apostates.

Where did those ‘rumors’ come from that al Sarout pledged allegiance to ISIS?

In December 2014, after he was kicked out of Homs, Abdul Basset Sarout himself said that he was joining the Islamic State:

Sarot had recently published a video clip denying the news of his martyrdom and confirming that he was preparing for a new step soon, in what appeared to be the intention of joining the “Daash”.

What is this group Jaysh al-Izza to which the Islamic State wanna-be al-Sarout belonged?

Rejected by the Islamic State al-Sarout’s stayed on as a member of Jaysh al-Izza, led by former Maj. Jamil al-Saleh. The group received money, anti-tank weapons and other material from the United States under President Obama’s secret Operation Timber-Sycamore. Then as now the ‘moderate rebels’ of Jaysh al-Izza operate as a ‘Free Syrian Army’ front group to funnel foreign supplies to al-Qaeda.

Russian air strikes in northwest Syria which Moscow said targeted Islamic State fighters hit a rebel group supported by Western opponents of President Bashar al-Assad on Wednesday, wounding eight, the group’s commander said.
…
“The northern countryside of Hama has no presence of ISIS at all and is under the control of the Free Syrian Army,” Major Jamil al-Saleh, who defected from the Syrian army in 2012, told Reuters via Skype.Saleh said his group had been supplied with advanced anti-tank missiles by foreign powers opposed to Assad.

Jamil al-Saleh, Abdul Baset al-Sarout’s commander who claimed that “the northern countryside of Hama” was “under the control of the Free Syrian Army”, recently appeared in another video. His troops wear shoulder patches with al-Qaeda flags.

Within Syria @WithinSyriaBlog – 10:09 utc – 4 Jun 2019New video released by Jaysh al-Izza supporters shows the group’s commander Jamil al-Saleh visiting his troops, one of them is wearing a batch of al-Qaeda. Jaysh al-Izza was always a proxy of al-Nusra Front\HTS. Yet it received US support, now Turkish support. 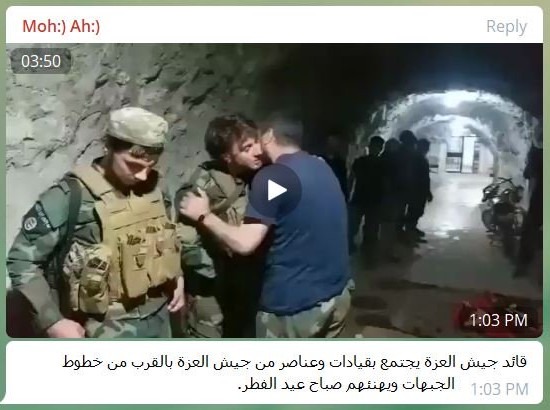 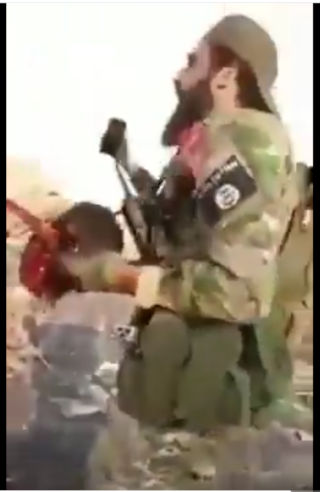 That the ‘western’ mainstream media and their sectarain analysts continue to glorify al-Sarout, despite all that is known about him and his group, is a sure sign that the war the ‘west’ wages through its Jihadi proxies against Syria is far from over.

About the Author
The author is Moon of Alabama’s founding (and chief) editor. He uses the pseudonym “b”.